It was supposed to be a day filled with joy. Jacob Skarratts and Tania Miller from Australia had decided to take their relationship to the next level by planning a dream wedding.

Many months had gone into organizing the big day and their little daughter Paige was thrilled by the idea. "My mommy and daddy are getting married and I'm going to be the flower girl," Paige said to everyone she met.

However, the wedding day had to be brought forward. The reason was both beautiful and heartbreaking at the same time, as Jacob and Tania wanted to make sure Paige would fulfill her dream of being a flower girl. But the clock was ticking — young Paige was terminally ill and probably didn't have much time left.

Her diagnosis was unexpected and devastating. Two months earlier, Paige was a happy girl in the best of health. However, she soon started suffering from headaches that wouldn't go away and continued to get worse. The doctors treating Paige had some bad news — there was a tumor the size of a lemon in her brain.

Though she underwent surgery several days later, doctors discovered that the tumor was inoperable. In the end, her desperate parents agreed to chemotherapy and radiation treatment, but the young girl's body wasn't able to tolerate either method. With no other alternatives, the doctors told Paige's parents that there was nothing more they could do for their daughter. They added that she probably only had a few more weeks left.

It's unimaginable what Jacob and Tania must have been going through. In their despair, they were determined to make sure their little girl wouldn't miss out on her dream of being a flower girl. 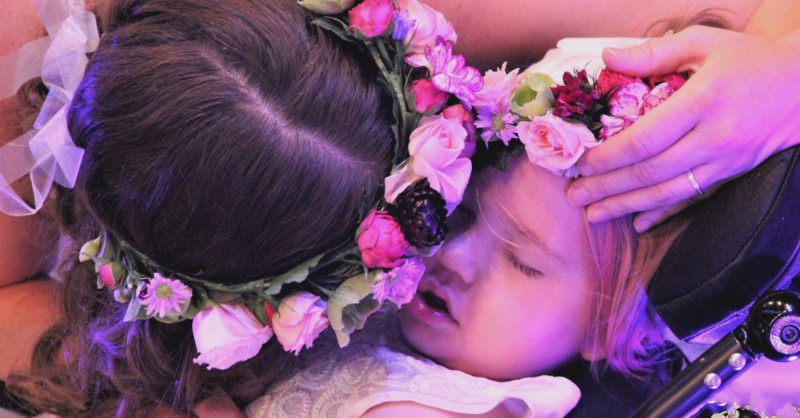 They had no time to lose. In only 24 hours, friends, family and hospital staff helped them organize a ceremony at the clinic. After a wedding dress and cake were quickly brought in, the most important guests hurried over to the hospital.

Though Paige was too weak to open her eyes as her mother dressed her, she knew exactly was about to happen. Tania remained at her daughter's side while she too was getting ready for the wedding.

A caregiver brought the young girl to the hospital garden, where her tearful parents exchanged vows in front 30 friends and family.

"This isn't how we planned it, she couldn't even open her eyes, but we had her there and that's the main thing. She got to feel and hear and sense the love she's created," Jacob said. With a basket of flowers on her lap, Paige got to fulfill her dream and stole the show in her beautiful dress.

Refusing to give up on their daughter, Jacob and Tania have set up a GoFundMe page to help pay for further treatment. In their eyes, all hope is not lost.

Whatever the future may hold, Jacob and Tania managed to make their daughter's dream come true. We wish them all the best.