Justice for Caitlyn the dog: Animal torturer gets 15 years inside

It has taken over two years, but the man who abused Caitlyn the dog is finally getting the punishment he deserves. Back in May 2015, local residents in North Charleston, South Carolina, found the Staffordshire terrier in a desperate state.

Someone had duct-taped Caitlyn's snout shut, probably to stop her from barking. However, the tape was so tightly bound that it had cut into the poor animal's flesh. Caitlyn's tongue had become black, as the tape had cut off the blood supply. 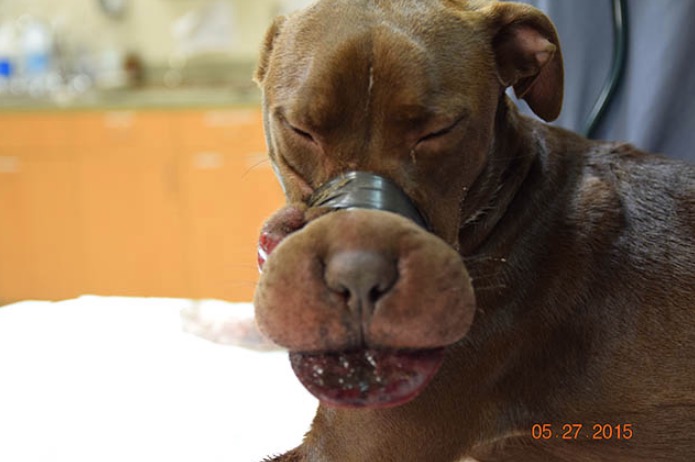 For two days, the young dog walked around helplessly in immense pain before she was taken to an animal rescue center; even the vets had never encountered such a despicable case of animal cruelty. Several lengthy operations were needed to save the badly injured dog's life. While Caitlyn was being treated, police were able to track down the man who had put her through all this pain.

The 41-year-old was finally tried last March and sentenced to five years in prison; the perpetrator will spend a total of 15 years behind bars due to other offenses. Determined that the man would receive the heaviest sentence, lawyer Ted Carvey fought long and hard for justice for Caitlyn.

Caitlyn has since been adopted by a loving family. The scars on her snout are a daily reminder of the torture she suffered. Yet her former owner will now have a long time to think about what he has done and won't see the light of day anytime soon.

This sort of sentence shows that you simply can't get away with treating animals in such a barbaric way without expecting any consequences. Anyone who is cruel toward animals deserves a long spell inside.